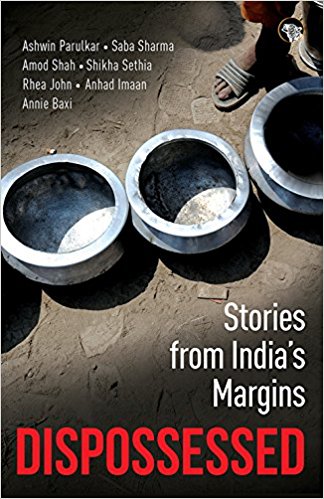 In 2005, starving members of the Bhuiya clan in one of Bihar’s poorest villages dug up a long-buried dead goat, cooked and ate it. Sixteen people died within days, twelve of them children.

Bengali-speaking Muslims who had moved to Rajasthan from West Bengal in the 1970s and ’80s were summarily declared Bangladeshi terrorists in the aftermath of the 2008 Jaipur bomb blasts. They remain stateless in their own country.

Landless Lodhas, members of an erstwhile ‘Criminal Tribe’ in Bihar, grapple even today with centuries of shame and dispossession.

These stories—along with those of women with mental and physical disabilities in rural areas, homeless men living in Yamuna Pushta, inNew Delhi, and patients in a leprosy colony in Orissa—reveal both stigma and support, harsh lives, an uncaring, corrupt state and moments of resilience.

Drawn from interviews and conversations as part of a study on destitution by the Centre for Equity Studies, Dispossessed: Stories from India’s Margins takes a wide-ranging view of what it means to be destitute, displaced and marginalized in contemporary India. Equally importantly, through these personal accounts of their research, the authors explore their own privileges in comparison.

Written with sensitivity and care, this is an important book that perceptively questions India’s engagement with the people at its margins and should be essential reading for all.