Highlight>
CPRBooksIdeology and Identity: The Changing Party Systems of India

Ideology and Identity: The Changing Party Systems of India 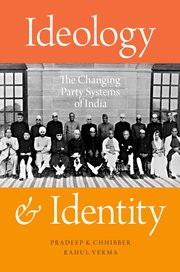 Indian party politics, commonly viewed as chaotic, clientelistic, and corrupt, is nevertheless a model for deepening democracy and accommodating diversity. Historically, though, observers have argued that Indian politics is non-ideological in nature. In contrast, Pradeep Chhibber and Rahul Verma contend that the Western European paradigm of “ideology” is not applicable to many contemporary multiethnic countries. Using survey data from the Indian National Election Studies and evidence from the Constituent Assembly debates, they show In more diverse states such as India, the most important ideological debates center on statism – the extent to which the state should dominate and regulate society- and recognition- whether and how the state should accommodate various marginalized groups and protect minority rights from majorities.