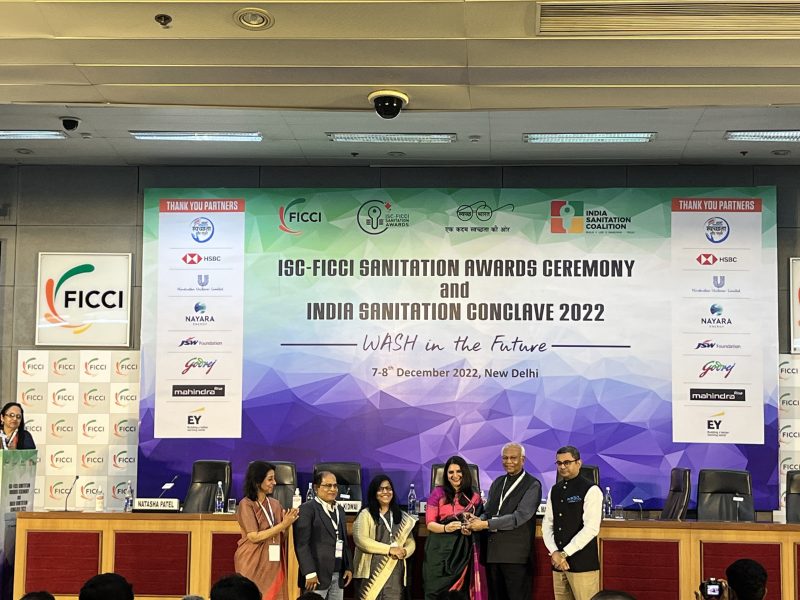 New Delhi 7 December: The Scaling City Institutions for India (SCI-FI) Initiative at the Centre for Policy Research (CPR) won the award for the ‘best non-profit engagement model in sanitation: rural and urban’ at the 6th edition of the ISC-FICCI Sanitation Awards Ceremony and India Sanitation Conclave. CPR’s SCI-FI Initiative was presented the award in recognition and appreciation for the unique urban-rural convergence model for faecal sludge management in Dhenkanal in Odisha. The initiative has been working in the state since 2014, offering technical expertise to the state and local-level administration to achieve safely-managed sanitation for all.

The urban-rural convergence project was conceptualised by CPR’s SCI-FI Initiative in response to the emerging need for faecal sludge management in Odisha’s rural areas as the state witnessed rapid construction of toilet facilities under Swachh Bharat. The model is based on taking a district-wide planning approach to sanitation. It involves leveraging existing urban sanitation infrastructure and services for rural areas, in neighboring gram panchayats. The successful implementation of the model has led to a scale-up across Odisha. It has also received traction at the national level.

Speaking on the occasion, Shubhagato Dasgupta, Senior Fellow and Director of CPR’s SCI-FI Initiative said, “We are delighted to receive this award and would like to thank our many partners including the Bill and Melinda Gates Foundation, UNICEF, Arghyam, Practical Action, the Municipality and District government of Dhenkanal and finally and foremost the Housing and Urban Development Department of the Government of Odisha without whom this would not have been possible.”

President and Chief Executive of CPR, Yamini Aiyar said, “In the past few years, CPR has broadened its engagements and deepened work at the subnational level, offering technical expertise to solve difficult and complex policy problems. Our longstanding work in Odisha aimed to provide safely managed sanitation for all is one such example. This award is a recognition of that effort.”