In June 2014, the Ministry of Environment Forests and Climate Change (MoEFCC) constituted a committee under the chairmanship of Dr Shailesh Nayak to review the Coastal Regulation Zone (CRZ) Notification, 2011.

This committee was asked to examine issues relating to Maharashtra, Karnataka and Kerala raised by the respective state governments through various letters to the MoEFCC between August 2013 and February 2014. It also had to examine errors/inconsistencies in the CRZ Notification, 2011 and address ‘procedural simplification’.

The committee held meetings with Maharashtra, Kerala and Karnataka in July and August, 2014 and held a meeting for all coastal states and union territories in Delhi in October 2014, and submitted its report to the MoEFCC in January, 2015. The MoEFCC did not make the report public until June, 2016. The ministry shared the report only after a Right to Information appeal reached the Central Information Commission (CIC) and the CIC ordered the Ministry to make the report available (Read details here). 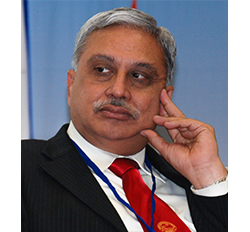 Dr Nayak chaired another committee concerning coastal regulation, which was supposed to suggest a uniform procedure for the demarcation of high tide line (HTL) and low tide line (LTL) for the Indian coast constituted by the National Coastal Zone Management Authority (NCZMA) in June, 2013. Prior to this, the CRZ Notification, 2011 authorised seven agencies to demarcate tidal lines and NCZMA noted that the procedure of demarcation across these agencies lacked consistency. The committee was also asked to bring clarity on cost, time and services to be involved in the tidal demarcation.
The interview with Dr Nayak below, conducted on 11 April, 2016, by Meenakshi Kapoor of the CPR Namati Environment Justice Program and Nihar Gokhale, an independent journalist, is an attempt to understand the changes proposed under his leadership of the two committees.

Dr Shailesh Nayak is currently the president of the 36th International Geological Congress at Ministry of Earth Sciences (MoES). Prior to this, till August 2015, he was the Secretary at the MoES.

Q. You were chairing the committee to review the CRZ Notification? Why was the need felt to review it?

Many State governments were expressing their concerns regarding implementation of CRZ Notification, 2011. All of them were committed to protect the coastal ecosystems but wanted to address inconsistencies in notification and amendments and simplification of procedures for obtaining clearances. Hence, this Committee was constituted to look into their concerns and suggest possible changes to the existing CRZ Notification, if required.

Q. Who all did you meet while reviewing the notification?

We met Chief Minister of Kerala, and Chief Secretary of Maharashtra and Secretaries and senior officials from all coastal states and Union Territories (UTs).

Q. Were any NGOs or groups consulted? Did you receive any submissions?

We did not consult anybody other than the state governments and the UTs. We did not receive any submissions.

Q. But the Terms of Reference (ToR) also had a point that read ‘The committee will look into any other issues that it feels are important’?

Yes, that is usually mentioned in all ToRs. We looked into all issues related to concerns of state governments.

Q. Did you face any challenges while reviewing?

Q. The only state representative who was on the committee was Shri Hardik Shah from Gujarat State Coastal Zone Management Authority. Is there any particular reason that other states were not represented?

Shri Hardik Shah was in the Committee not as the state representative but as an expert on CRZ.

(To learn more about how the state coastal zone management authorities (SCZMA), institutions responsible for implementation of the Notification at the state level, were not made part of the review, read a previous piece here.)

No, we gave only generic recommendations. No special considerations for any specific area were addressed.

Q. What were your suggestions geared towards?

Our suggestions were: One, the CRZ notification should focus on protection and conservation of ecologically sensitive areas, essentially CRZ I (See illustration for different CRZ zones, below). All developmental work should be taken up considering ecological importance and restrictions /regulations of CRZ notification. Second, State Laws should not be in conflict with CRZ notification. Third, we also advocated greater use of satellite data and emphasised on capacity building. 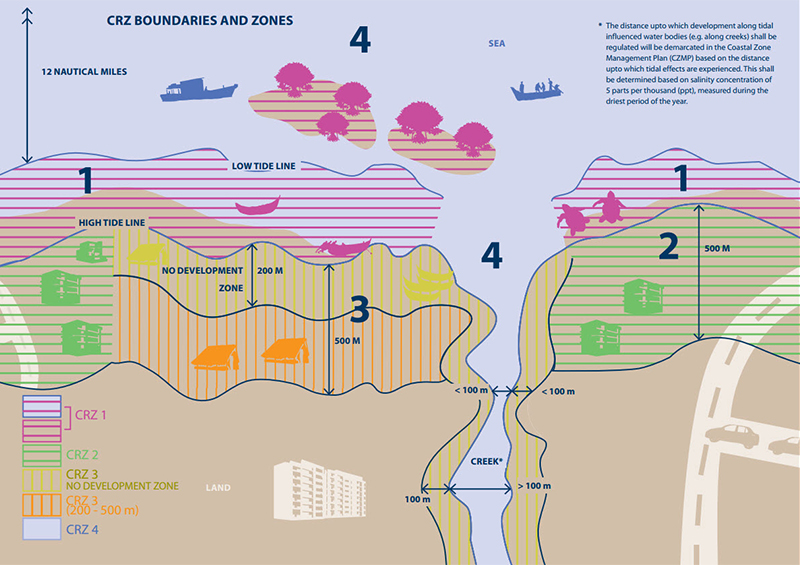 Q. MoEFCC is not making the report public. Why do you think the ministry is taking so long to make it available in public domain?

I do not know. Perhaps, they are taking opinions from other stakeholders. (Now it is available).

Q. Now National Centre for Sustainable Coastal Management (NCSCM) is involved in tidal demarcation (CRZ Notification, 2011 originally authorised seven agencies to demarcate high tide line (HTL) and low tide line (LTL). State Governments could appoint any one of these for tidal demarcation of their respective coastlines). All states have to get their tidal lines approved by NCSCM. What do you think about this? Is it something you recommended?

There is a separate committee, which has suggested a method to delineate high tide and low tide line. These lines can be finalised after consultation with state government.

Q. There have been six amendments to the notification in the last year. All came after you submitted the report. Are they stemming from the report?

I do not know.

Q. One is to allow buildings as per the prevailing town & country planning guidelines in CRZ II areas. It means more building height?

I feel rationalised changes in CRZ II and CRZ III should be fine till CRZ I is protected. If there are overlaps between provisions of regulating the CRZ areas, we need to make sure that such overlaps are avoided.

Q. You were made chairman of a committee in the year 2013 to bring uniformity in HTL-LTL demarcation. What all did it discuss?

The agencies authorised to do tidal demarcation have employed different methods to delineate HTL and LTL. Our job was to suggest a uniform method to delineate these lines.

Q. The committee was also asked to standardise the fees charged by different agencies for tidal demarcation?

We did not standardise the fee, but suggested how cost can be computed for each element of tidal demarcation. The cost can vary depending on complexities in the area under study.

Q. How often should the tidal demarcation be done?

Technically, it takes 18.6 years for exactly same tidal conditions to return. So every 20 years, the maps should be updated.

The other pieces in this series can be accessed below:

Low-Skilled Migration and Precarious Work: Where do the borders of forced migration begin and end?