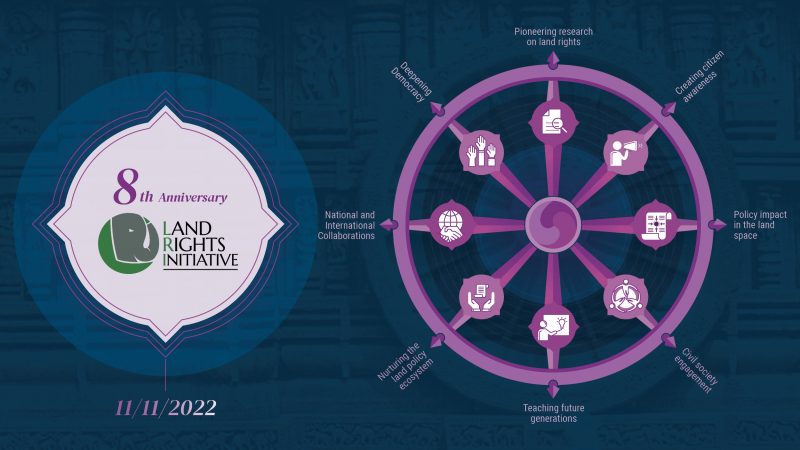 Land Rights Initiative turns 8 today! As we mark this important milestone, I am incredibly grateful to the Centre for Policy Research, our researchers, donors, mentors, collaborators, government, civil society groups, and communities that have made this journey possible and our work sustainable.

I set up the Land Rights Initiative (“LRI”) with the belief that land is central not just to India’s economic development agenda but to the very idea of India itself. Even as we celebrate 75 years of India’s independence this year, almost 60 percent of all Indians are directly dependent upon the land for their livelihoods. Land is not just an economic resource; it is also central to individual dignity and community identity, history, and culture. Land reforms were crucial not only to India’s economic development but also to its political independence and social redistribution story.

India’s freedom movement was premised upon liberating us from a past of colonial domination and subordination and upon building a future that would bring about rapid economic development for all Indians and ensure individual dignity for all. The Indian Constitution adopted in 1950 safeguarded land rights of Scheduled Tribes and through the inclusion of the fundamental right to property in Article 19(1) (f), for the first time guaranteed equal property rights to all Indians, including women and Dalits or Scheduled Castes. Together, women, Scheduled Castes, and Adivasis or Scheduled Tribes constitute the bottom 60% of the population.

However, as the development agenda played out over the following decades, it brought to the fore the inherent tension between the utilitarian nature of the “development discourse” and the dignitarian nature of the “rights discourse”. This led to the gradual demise of the right to property through a series of constitutional amendments between 1951 and 1978. Ostensibly done for the benefit of the poor, the period since the abolition of the right to property in fact saw greater displacement and dispossession of people from the land due to various development projects. Particularly vulnerable were the Scheduled Tribes, which constitute only 8.6% of India’s population but constitute nearly 50% of those displaced between 1950 and 1999, many of them twice in one lifetime due to dams, mines, wildlife parks, and sanctuaries. This widespread development-induced displacement led to persistent and ubiquitous legal and extra-legal conflict over land, plaguing the lives of people across millions of hectares of land and threatening investments worth billions of dollars.

It was against this backdrop that Land Rights Initiative set out to investigate the reasons for conflict over land and to build a body of knowledge that would enable the government to formulate and implement policies in a way that would preserve the land rights of the people of India without derailing the development agenda.

Over the first five years of its existence, LRI released two pioneering research reports and a singular policy brief that outlined reasons for land conflict and made policy suggestions for reform. The first research report on Land Acquisition in India: A Review of Supreme Court Cases from 1950 to 2016 (CPR: 2017) constituted a first-time-ever comprehensive attempt to analyse all judicial decisions by the Supreme Court on land acquisition, numbering 1269, to illuminate the reasons for popular discontent with the government’s processes of land acquisition which had, in turn, led to both legal and extra-legal conflict over land. This Report has been used extensively by the Department of Land Resources in the Ministry of Rural Development and has been used in training and capacity-building programmes by the National Highways Authority of India and the National Institute for Defence Estates Management. The Report has also been used widely by individual litigants defending their lands against governmental acquisition. That this Report is now the authoritative text on land acquisition is evident from the fact that it was cited by opposing parties, both the government and farmers, before the Supreme Court Constitution bench in Indore Development Authority v. Manoharlal and others (2020).

Consolidating our work over a five-year period, the policy brief on Understanding Land Conflict in India: Suggestions for Reform (2019) highlighted the conflicting people versus state narratives over land which in turn had led to over a thousand colonial and post-colonial laws and administrative practices. The absence of a publicly available comprehensive database of land laws greatly hampered citizen access to the laws that govern one of the most important aspects of our lives. The desire to fill this gap is what birthed LRI’s most ambitious project called One Thousand Land Laws: Mapping Indian Land Laws. Conceptualised and executed over a period of five years, this project involves an attempt to create a comprehensive, exploratory archive of all land laws in India, a veritable “google maps for land laws”. This year, we launched the web and mobile versions of this website, accessible at landlawsofindia.org.

The website currently features officially authenticated copies of nearly 500 original and active central laws, and state laws from a geographically representative sample of eight states, namely, Andhra Pradesh, Assam, Bihar, Gujarat, Jharkhand, Meghalaya, Punjab, and Telangana. The website also features Hindi and English language summaries of all laws. From laws pertaining to land reforms and land acquisition, to revenue and taxation and land use, forest and mining laws; from laws promoting and regulating urban and infrastructural development to laws dealing with evacuee, enemy, ancestral and religious property, this vast legal apparatus governs the lives of the people of India, and their interactions with each other and the state. Embedded within the website is a subject-wise classification of all the laws according to over thirty categories, further subdivided into a hundred and fifty sub categories.

For our work in creating citizen awareness and deepening democracy, in 2020, LRI was one of fifteen organisations (out of a hundred and fifty) shortlisted for the inaugural Shamnad Basheer Citizenship Prize, which recognises organisations transforming the field of law and justice. LRI’s research papers have informed courses and curricula across law schools and social science programmes. LRI’s internship programme has exposed and nurtured an entire generation of students in research on this complex subject. As the pioneering institution in the land policy space, LRI has also nurtured the land policy ecosystem by supporting the work of land policy initiatives at other research institutions.

Even as LRI enters its ninth year, climate devastation is upon us and world leaders are meeting in Egypt at the UN Climate Change Conference 27 to shape our collective response to the climate crisis. Our learnings over the past eight years have led us to conclude that land is not just crucial to the imagination of India, but also crucial to our imagination of sustainable survival on planet earth. We at LRI strongly believe that the indigenous imagination of “jal, jungle, zameen” as constituting an indivisible ecosystem, is crucial not just to the preservation of the way of life of Adivasis or Scheduled Tribes but is crucial to sustainable living on the planet. Land rights are an important mechanism for ensuring individual dignity and intergenerational equity, and community-based resource management systems are important for sustainable development. Over the next two years, LRI hopes to create dialogic engagement between our body of work on land rights and economic development with climate imaginaries of sustainable survival.

What is happening beyond large cities? Understanding census towns in India

Understanding the Land Rights of Tribal Populations in Scheduled Areas