The series is titled ‘Plugging in: Electricity consumption in Indian Homes’.

Electricity consumption debates, for the most part, focus on high-rise residential and commercial establishments, often ignoring low-income housing. The rationale for this omission is the low level of electricity use in affordable housing, with the assumption that little is at stake from its consideration in national energy and climate debates. This, however, may no longer be true.

As India urbanises, housing has been unable to keep pace. The housing shortage is reported to be near 19 million units, with low-income households accounting for the largest proportion. The government’s ‘Housing for All’ programme aims to fill this gap by providing affordable housing for 20 million households by 2022. This new construction will partly condition future energy use from the provision of basic services, with increased access to electricity and commercial appliance markets. In this post, we examine the most basic use of electricity within affordable homes – lighting.

Lighting forms a large share of electricity services availed by low-income homes and consequently the electricity bill. Technologically, LED bulbs provide the largest reduction in lighting electricity consumption, without reducing the amount of light provided, and with a lifespan that is up to 25 times that of an ordinary bulb. However, LED bulbs cost more, which can deter the willingness of households to pay. As described in this series’ previous post, the government’s UJALA scheme has increased the use of LEDs by bringing down costs and increasing awareness. However, the programme’s impacts on low income households, those with the potential for maximum benefits, are not yet clear.

Are lower income households purchasing technologically advanced LED bulbs? We conducted a survey in 2017, about a year after the launch of the UJALA scheme, in Rajkot, Gujarat to examine lighting services in low-income homes. This is part of an ongoing study on energy use in low income urban households under the CapaCITIES project. We find LED penetration in the sample surveyed is remarkably high at 63% of all bulbs (Figure 1).

To understand this high rate of LED use, we categorise results according to the three types of government affordable housing: BSUP or Basic Services for the Urban Poor (built 2007 onwards); EWS or Economically Weaker Sections; and LIG or Low Income Groups housing (EWS and LIG are built under the Housing for All programme, 2015 onwards) (Figure 2). The categories broadly correlate to income – BSUP residents, on average, being the poorest in the sample, and LIG, the best off.

Figure 2 shows that the widespread use of LEDs is especially true for EWS and LIG categories, with more than 90% having at least one LED. Tube lights, CFLs, and incandescent bulbs on the other hand have lower penetration rates in these homes. Further, homes are buying more than one LED. The mode number of LEDs in a EWS home is three, and in LIG homes is five. This is within the number provided under the UJALA scheme in Rajkot, which is up to 10 subsidised LEDs per home at Rs. 80 per 9W bulb.

We also find that LED ownership, standardised for home sizes, is correlated with household assets or their ability to consume (Figure 3). Richer homes buy more LEDs, though a degree of incandescent bulbs persist in the system. And while Figures 2 and 3 show a strikingly high rate of LED use, they also show that not all homes have made this transition. Specifically, BSUP homes – which are of the lowest-income of the three categories – have about half the LED penetration compared with EWS and LIG homes (Figure 2) and the mode number of LEDs owned in BSUP homes is zero. 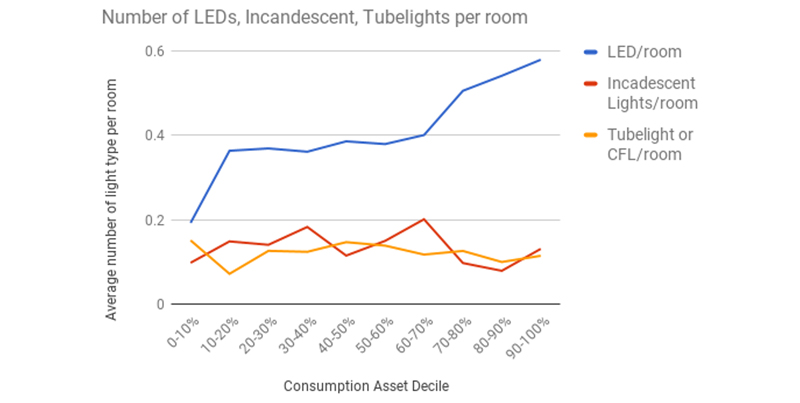 Awareness of the LED scheme

Why do some households buy LEDs and others don’t? Is the difference a function of households’ awareness of the LED scheme (Figure 4)?

Awareness of the LED scheme maps on to the ownership of LED bulbs in housing types. EWS and LIG homes are much more aware about the scheme, and own many more LEDs, while the reverse is true for BSUP. To test if awareness about government schemes was generally high, or whether this was particular to UJALA, we also asked households of their awareness of the Smart City scheme which is well advertised in the city. Less than 1% of households reported awareness of this flagship city scheme – compared with high awareness of UJALA.

At the same time, it is not that all households know about the LED scheme – especially not the poorer BSUP homes. We find from discussions with residents that the most successful scheme awareness measure was the information that persons (predominantly men) got at the local utility bill payment centre. Bill payers could purchase LEDs at the payment centre itself, including with no upfront cost and monthly instalments, an option available by a third of the purchasers as per scheme representatives. Learning about a money saving scheme at the point of bill payment worked well to motivate participation. In addition, media campaigns for the scheme were important for those who spent time watching TV or listening to the radio, especially women. However, homes with different circumstances, such as in the lower income BSUP homes – where electricity connections and payment structures could be informal; the radio and TV were used less; and bills were paid by younger family members because of multiple jobs – did not benefit similarly. In the next round of LED deployment, unpacking these differences in scheme awareness will be important to influence path dependent lighting use patterns.

In the next post, we move from lighting to appliances and examine the efficiency impacts from India’s standards and labeling programmes.

This piece is authored by Radhika Khosla and Ankit Bhardwaj at the Centre for Policy Research.