Understanding homelessness in Delhi through the voice of the homeless

This working paper from CPR’s and TISS’s (Tata Institute of Social Sciences) Understanding Metropolitan Homelessness project tells stories of six migrant homeless men from Uttar Pradesh and Nagaland who live, for various durations, in shelters along the western bank of the Yamuna river in North Delhi, locally referred to as ‘Yamuna Pushta’. Through tracing their journeys from villages and towns to Delhi’s streets, the paper explores how these men became homeless and how they survive homelessness in Delhi.

This project, which is funded by ICSSR (Indian Council of Social Science Research) and is being conducted by CPR and TISS, is led by Partha Mukhopadhyay and Ashwin Parulkar at CPR, and Tarique Mohammed at TISS. A key objective of the project in general, and this paper in particular, is to better understand the structural causes of homelessness (e.g. poverty, unemployment) and how these are interlinked – through capturing the lived experiences of the homeless in their voice. This research aims to inform successful policy and implementation responses to address the current ineffectiveness of outreach efforts to homeless people in Delhi, despite interventions by the Supreme Court and support schemes designed by the government.

The six stories in the paper uncover conditions, and combinations, of extreme poverty and physical abuse experienced by these men in their native places before they left home. It traces how they secure jobs, and survive, in daily wage, informal economies without housing, as well as access social services like shelter, health and drug de-addiction programs to endure the streets of Delhi.

According to a 2010 United Nations Development Programme (UNDP) survey, 87% of nearly 55,955 homeless adults worked jobs in the informal economy, entailing ‘the most rigorous activities which are essential for movement and building in the city.’ This paper describes in detail the varied experiences these six men have in such jobs that they find through contractors in informal labour ‘markets’ (mandis); as cooks and servers in small eateries (dhabas), and as wedding catering party workers.

Through their trajectories, Parulkar also explores differences between working homeless men who return home to support families and those who have no ties with their native places and live on the streets indefinitely. For a sense of how these men became homeless and the work conditions they experience while homeless, listen to audio samples of interviews (above) conducted during field research.

The full working paper can be accessed here. 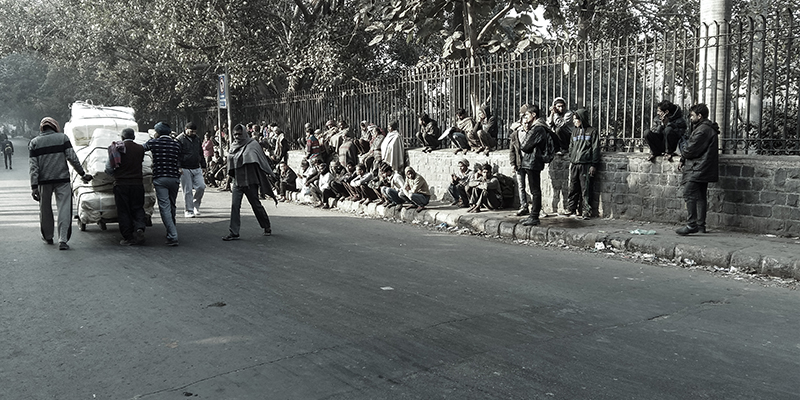 CPR Dialogues 2020- At the Threshold of a New Decade: Navigating the Emerging Geopolitical Landscape