Aug 8th:Why a Niti Aayog study on the economic costs of ‘judicial...

Highlight>
CPR Policy Engagements and Blogs Has MGNREGS Helped the Rural Economy in 2021?

Has MGNREGS Helped the Rural Economy in 2021?

A comparison of Mahatma Gandhi National Rural Employment Guarantee Scheme (MGNREGS) demand and supply of work between the first quarter of FY 2020, when the national lockdown was in place and the first quarter of FY 2021 when the second wave was at its peak offers a useful window into understanding the extent to which MGNREGS has provided robust support to rural India and the role of the Government in ensuring relief and protection to the vulnerable during the deadly second wave.

In 2020, when the ravages of COVID-19 and associated policies became visible, the MGNREGS provided a much needed the lifeline to most of India’s rural poor. Budgets were enhanced significantly. In FY 2020-21 Rs. 1.1 lakh crore (including payments due)[1] was spent on the scheme. As many as 7.55 crore households[2] across the country were given work through the year. However, demand for work consistently outstripped supply. A clear indicator that rural distress and unemployment persisted despite the opening up of the Indian economy in June 2020 after the national lockdown was lifted and a relatively healthy growth in agriculture.

In 2021, as the second wave hit, rural India suffered this time from the combination of health and economic shock. Once States began to announce lockdowns, unemployment rates rose once again. In April and May 2021, the Centre for Monitoring the Indian Economy (CMIE) recorded national unemployment rates at 7.97 in April and 11.90 per cent in May[3]. Unemployment in rural India increased from 7.13 percent in April 2021 to 10.63 in May 2021[4]. However, unlike in 2020, MGNREGS work was not provided at the scale needed.

In the first quarter of 2020, when the national lockdown was in place, (months of April, May and June 2020), demand for work under MGNREGS rose to new highs, touching 4.47 crores in June, the highest of the year[5]. Despite this sudden, massive increase in work demand, the response was robust and work availability high. May in particular saw 3.73 crore households demanding work, and 88.5 per cent of this demand, or 3.3 crore households were provided work[6]. MGNREGS not only proved to be the most important entitlement protecting India’s workers, it also proved to be elastic. Expanding, at speed, when needed and contracting when demand was low. It is important to note however, that despite this expansion, demand consistently outstripped supply.

Conversely, for the same months of 2021, not only was overall demand for work lower than in 2020, but supply of works was even lower. In comparison to the high of 4.47 crore households who demanded work in June of the previous year, 3.5 crore households demanded work in June 2021 – the highest of the year so far (as on 8th July, 2021)[7]. Despite this lower demand for work, the overall supply of works has been even lower for May and June 2021 than in the same months of 2020. This means that even though fewer people were turning to MGNREGS in rural areas this year, lesser work (and therefore, income) was being provided under the scheme. In May 2021, 2.76 crore households sought work through MGNREGS[8], but only 2.22 crore households (80.3 per cent) received work[9]. While the figures for June 2021 continue to be revised, current numbers suggest an even starker difference in the work demand met between June this year and the last. States like Madhya Pradesh, Rajasthan, Bihar, and Tamil Nadu met much less demand for work in 2021 over these three months than they did last year[10]. In contrast, the proportion of unmet demand in Uttar Pradesh, Maharashtra, Kerala and West Bengal was higher last year than this. 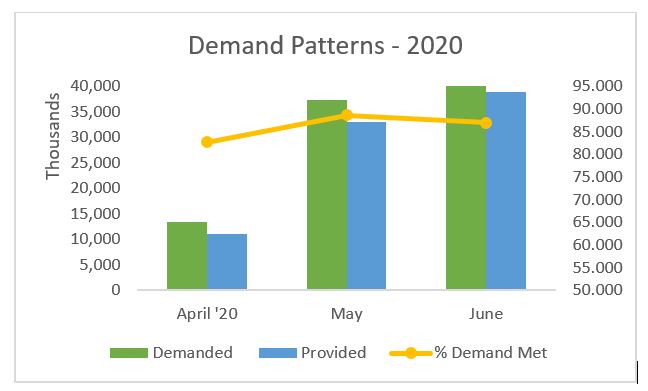 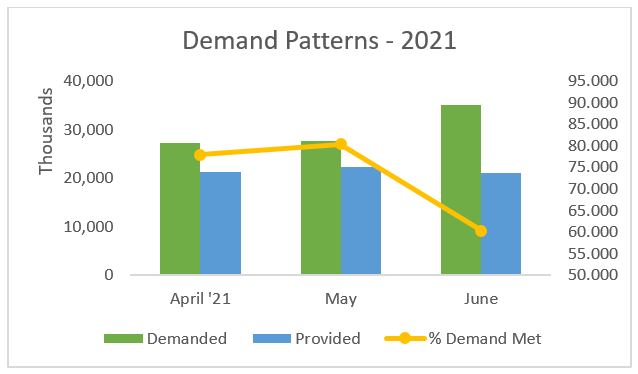 One of the long persistent challenges with MGNREGS implementation has been the delays in payments from one financial year flowing into the next year, because of bottlenecks in fund availability. Many states start the new financial year with pending liabilities or unpaid wages or material costs that need to be paid off as soon as new budgets are announced and monies released at the start of the financial year. The problem with high pending liabilities is that new budgets allocations are used to meet these liabilities and governments’ resorts to rationing demand, creating a vicious cycle of delayed payments.

In the first quarter of FY 2021, this all too familiar pattern unfolded, except this time given high rural distress, the costs have been higher. Nation-wide, total pending liabilities for FY 2021 was Rs. 9,810 crores[13]. There are important State wise differences. Madhya Pradesh opened the financial year with pending liabilities amounting to 697.57 crores[14]. As on 15th July 2021, the State has already utilized 98.17 per cent[15] of its available funds. A similar pattern has unfolded for Chhattisgarh, Himachal Pradesh and Uttarakhand, all states with high liabilities of previous years, also registered high rates of fund utilization. Demand for work has not abated in these States. In the first quarter of FY 2021, unmet demand in Madhya Pradesh was 18,42,054, for Chhattisgarh, it was 9,05,930, and for Uttarakhand, it was 1,24,938 households respectively[16]. It is likely therefore that these states will once again close the year with high pending liabilities and indulge in demand rationing, unless budgets are expanded.

Bihar’s case remains unique here: despite high rates of unmet demand for work and pending liabilities, its utilization of the available funds stands at only 83.49 per cent[17].

This pattern of high unmet demand (despite relatively lower ‘demand for work’ in 2021) and high utilization of funds is indicative of the fact administrative prioritization of providing ‘relief’ has been missing. In May 2020, the Government of India announced a relief package with substantially enhanced budget allocation for MGNREGS. This resulted an immediate increase in supply of MGNREGS works for much of rural India. Perhaps expecting the economy to be back on a recovery path in the FY 2021 budget, fund allocations were reduced from a total of Rs. 1,11,500 crores in FY 20[19] to Rs. 73,000 crores in FY 21[20]. Once the COVID-19 second wave hit, there was the expectation that MGNREGS would once expand to respond to the increased demand. However, this has not happened. It is often argued that budget allocations for MGNREGS are irrelevant because this is a ‘demand based’ program and funds are made available based on labour budget estimates provided from the ground. However, the reality is that when budget allocations are low, governments resort to rationing demand. Relatively low demand compression in 2021 is indicative of precisely this phenomenon. The fact that despite lower demand, work supply could not keep up is also indicative of the fact that claims that funds for MGNREGS are elastic are false. Low availability of funds inevitably means demand remains unmet thus undermining the ‘demand based’ entitlement that lies at the heart of the MGNREGS.

Last year, the COVID-19 lockdown-related distress mainly affected the non-agricultural sectors of the rural economy. The reasons for this was first, agricultural activities were exempted from any lockdown restrictions, and second, a very good monsoon. 2019 and 2020 were both surplus monsoon years and they produced bumper harvests. That, in combination with record MGNREGS person-days job generation, helped contain rural distress to an extent.

This year, the monsoon’s progress has not been up to initial forecasts. Unseasonal pre-monsoon showers (this May was the wettest May in 31 years) seemed to have disrupted normal heating patterns required for the formation of low pressure areas. As a result, the start of the monsoon season (June-September) saw an initial burst of high rainfall, only to stall after the third week of June. In fact, the northern limit of the monsoon has not moved at all since June 19 and only revived in mid-July. The Met Department’s latest forecasts suggest that the monsoon activity will revive from around July 10. But precious time has already been lost. The bulk of sowing of kharif crops happens between mid-June and mid-July. The crop sown after mid-July will not have enough time for vegetative growth, which will ultimately have a bearing on crop yields. Also, the enhanced possibility of the development of “negative Indian Ocean Dipole” conditions during July to September (most global climate models are predicting this) casts a cloud over the monsoon’s performance in the remaining part of the season.

There is thus a need to be proactive in pushing MGNREGS and planning for a sub-par agriculture year. The number of COVID cases is falling in rural areas and economies are slowly opening up. However, India is staring at the possibility of a long months of persistent rural distress. The time for action is now.

This note, part of the Understanding the Rural Economy series by CPR, has been authored by Yamini Aiyar, Avani Kapur and Harish Damodaran with research support from Ragini Rao Munjuluri and Samridhi Agarwal. Read other notes in the series:

Mapping Power: AAP and the Politics of Power in Delhi

From Myth to Reality